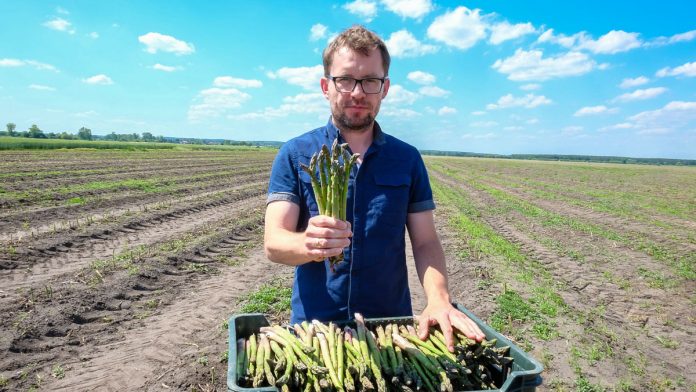 Do you like asparagus? I do, especially raw, straight from the field. It just takes a lot of walking. How much? You’ll find the answer at the end of this short summary of the season.

The asparagus season starts in December

Yes, it does. In December. We’re going to Ukraine to look for people. What’s the fastest way to get there? Virtually. We are on forty-seven platforms for job seekers. People write, they ask, they have doubts, some call, wanting to have contact with a real person and see if the company really exists. We also check, look at Facebook profiles – we need people who are calm and motivated. In January we have a selected group of several hundred people for whom we start arranging documents at the Employment Office.

The asparagus season begins in March

In March, we make production mounds, lay out wires for tunnels, and extend the film. We monitor soil temperature, dig holes, and count the number of spears that have set. 28 March – we got it! The first asparagus comes out of the ground and we can have a brilliant second breakfast – scrambled eggs with asparagus.

The asparagus season starts in April

In April, the actual asparagus season begins. Three hundred workers arrive, we accommodate them, complete the official formalities, register them in the database, and give them IDs.

We’re starting the harvest. For now, we harvest asparagus under the mini tunnels; soon, we will harvest the first vegetables from open fields. The stronger the field was in the previous year, the earlier it will give us the “gold of sandy soils”. Although here the gold is actually green, because we only grow green asparagus. 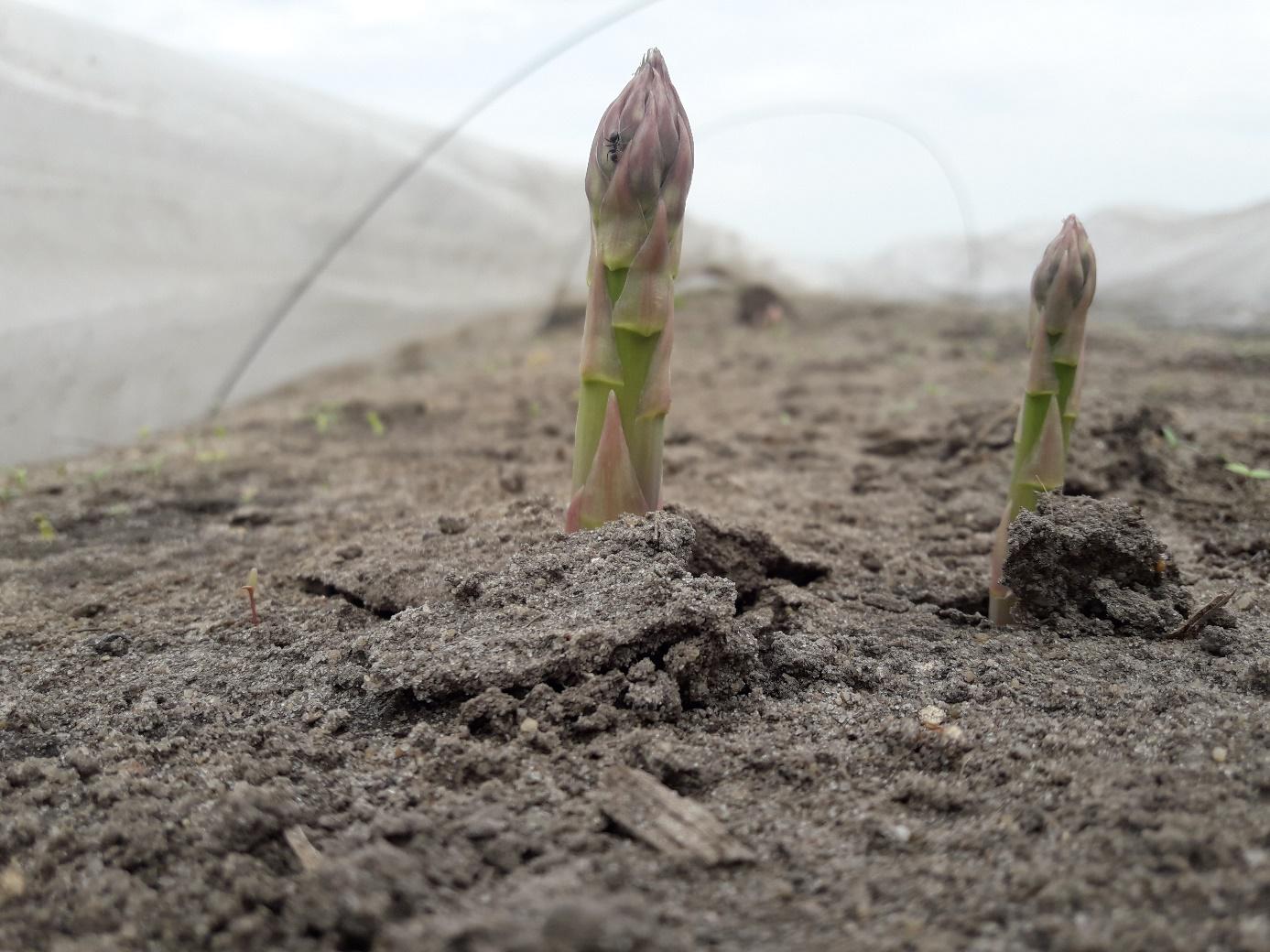 After three days, the packhouse starts. It works for a few hours a day for now. Trimming, dividing according to thickness and length – sixteen different sorts in all – weighing, a rubber band, a tag, a label, a bar code, a box, a traceability code, and that’s it. Now we can sell it.

The asparagus season starts in May

In May, we’re going full steam ahead. This year we tried to reduce the number of people needed in the field as much as possible. The boxes go in front of the workers, they just need to bend down, cut off the asparagus, and put it away. We go below one worker per hectare.

In the packhouse, we maximize the mechanization. The work is supposed to be simple. The time to train the workers is scarce, with many new people hired each year. We value those who come back and provide a base, a model for new ones. 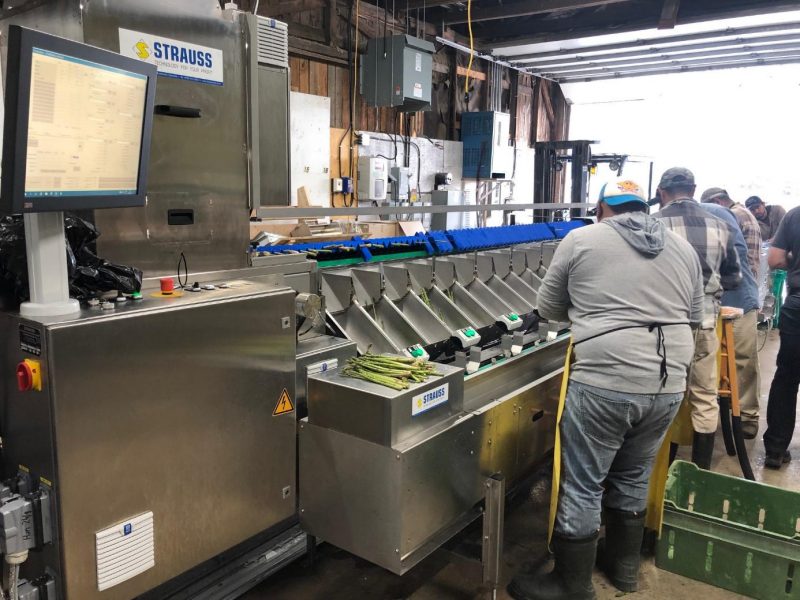 Cold mornings are disrupting our season. On the days we are expecting a mountain of asparagus, it is about zero at night. The asparagus stops growing. You should know that asparagus can grow as much as fifteen centimetres per day and this is closely correlated with the temperature. Before I leave the house I receive information on how much the model, marked asparagus has grown and based on this information I know how many tonnes we will harvest on a given day.

The asparagus season starts in June

Well, maybe not the season. But good prices. Poor quality asparagus from southern Europe is no longer on the market, the Germans are running out of their own, the French are busy with politics, and the English have lost their asparagus due to rotting. Ours is winning!

It’s very hot. This has a negative impact on the quality of the heads in the spears and the asparagus grows like crazy. We harvest twice a day to maintain quality.

All workers in the packhouse focus on this goal. Quality is the top priority! 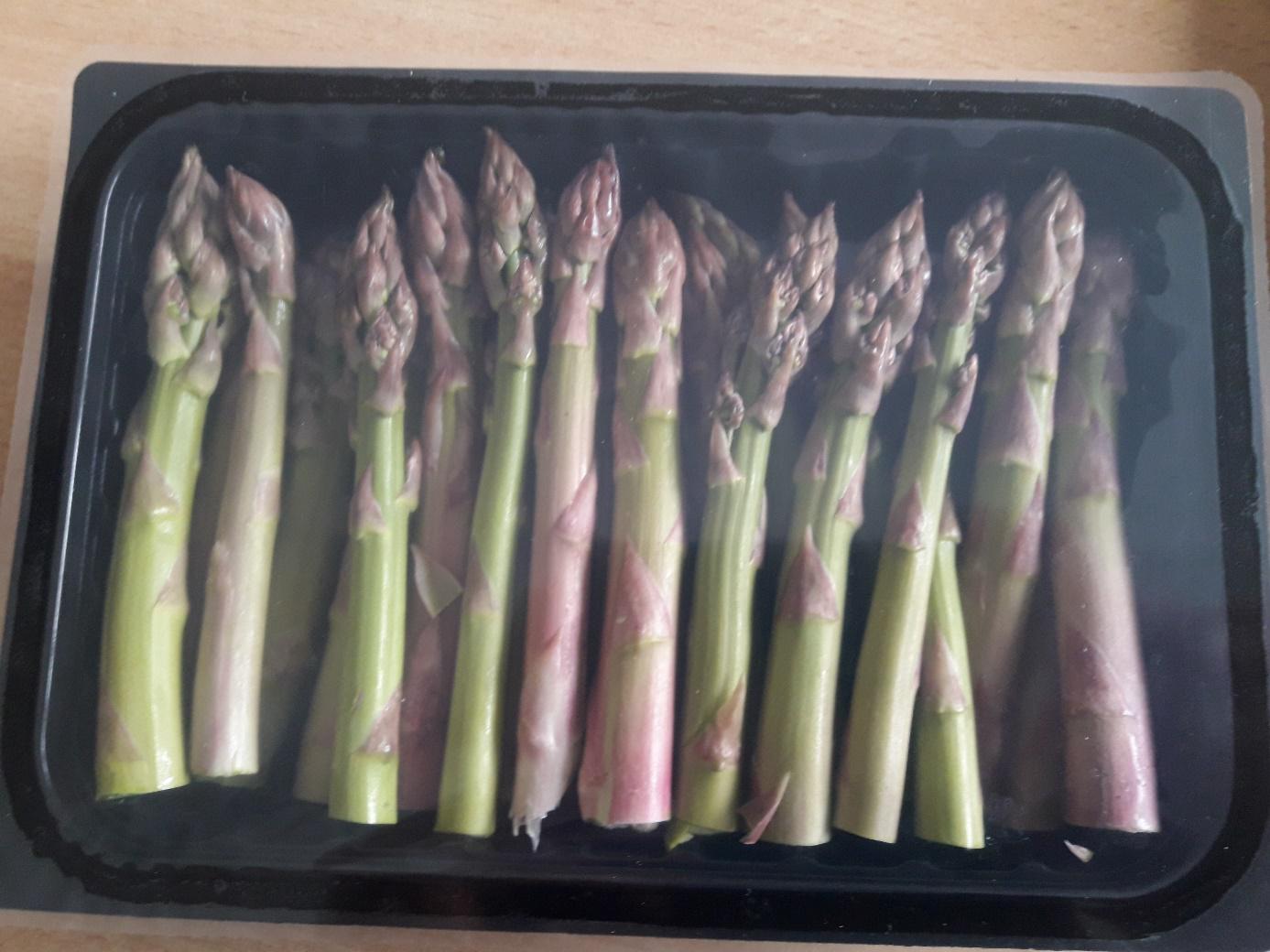 We circled the Earth twice this year

Asparagus is a perennial crop. The condition of the plants in the previous year, which was not satisfactory, has a direct impact on the crop. The droughts and heat of spring and summer caused the branchlets to fail to reach the satisfactory size and to be weaker than usual, and consequently limited quantity of nutrients reached the roots. The plants therefore had less energy reserves to use this year.

The crop of asparagus harvested in 2019 was directly correlated with the temperature pattern. In the diagram, the green line indicates the daily harvest in kg per ha – you can see the huge jumps and the complete lack of regularity. When night temperatures were above 15 degrees Celsius, the amount of crop harvested the next day was high, but when night temperatures dropped sharply, the harvest was almost zero. The black line shows the average harvest for seven consecutive days. 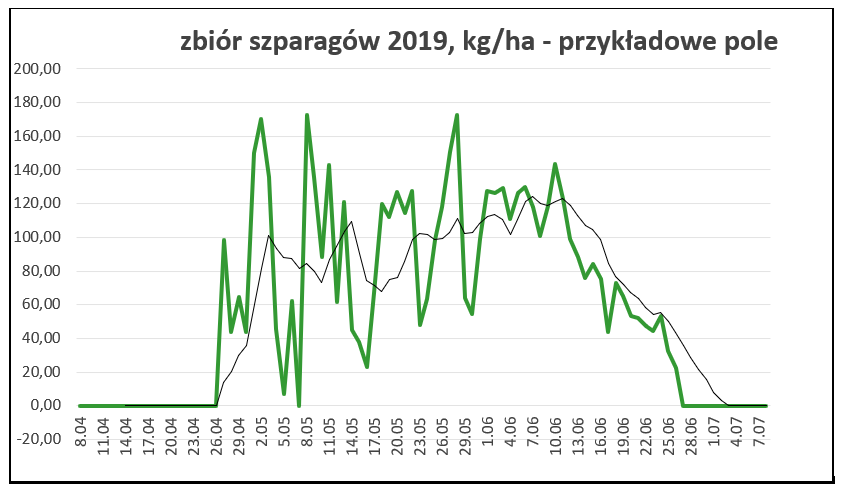 The hot weather in June had a negative impact on the quality and quantity of the asparagus harvested. The plants grew very fast and it was necessary to increase the harvest to two per day.

The prices of asparagus were satisfactory. At the beginning of the season, they were not very high due to the large amount of vegetables imported from southern Europe, but later they started to rise. The highest prices could be seen in June, when more fields were closed by owners who did not want to make the crop even weaker for the 2020 season.

The cultivation of asparagus in Poland is promising and consumption is growing every year. We have a lot of poor soils on which asparagus, unlike other crops, can grow – but it requires a change in the mindset of farmers. Vegetable growers need to start investing in cold storage facilities and equipment to sell quality produce.

A German company that manufactures asparagus machinery starts its sales in Poland.